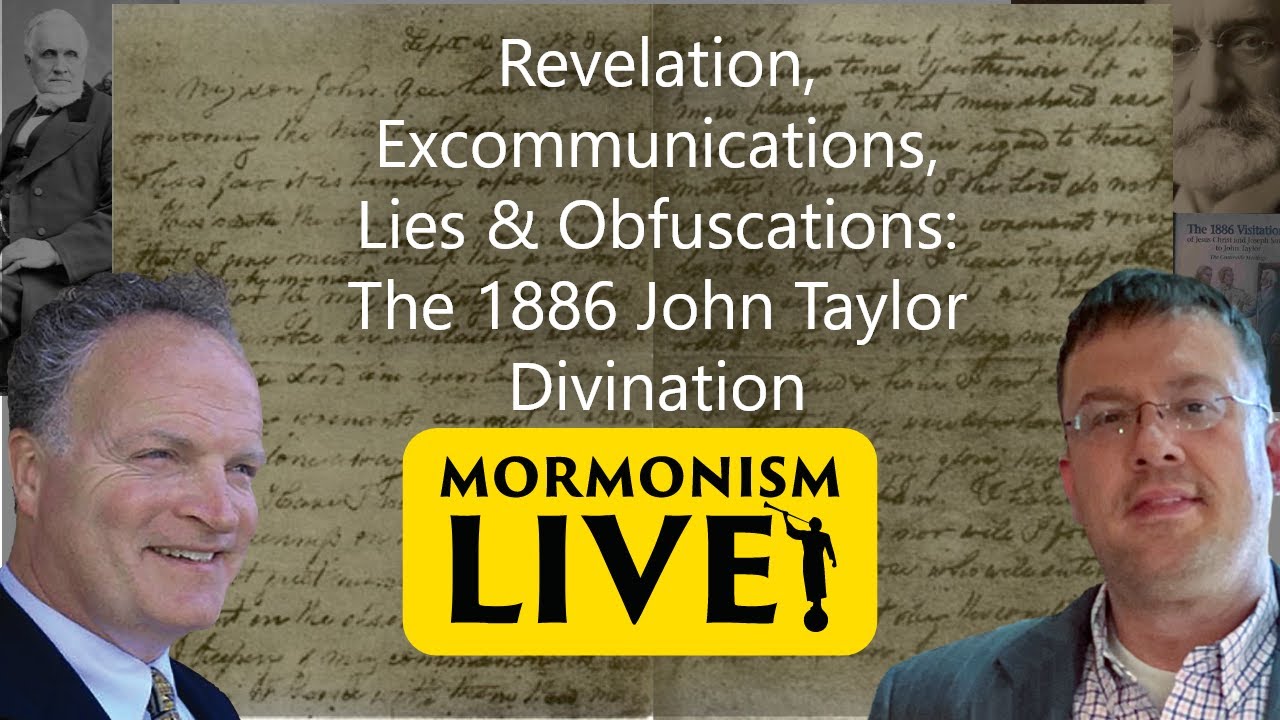 In 1886 LDS Prophet and Church President John Taylor documented a Revelation whereby Jesus Christ himself informed Taylor that Polygamy (The New and Everlasting Covenant) can and will NEVER be done away. Only to have the Church later disavow and distance themselves from Polygamy. On this Episode Bill Reel and RFM will help us understand the context of the 1886 Revelation/Vision, How the Church avoided dealing with Taylor’s Documented Revelation, How Apologists deal with it today, and lastly what it demonstrates about the integrity and honesty of the Church and its leaders around this event.

https://rsc.byu.edu/champion-liberty-john-taylor/john-revelator-written-revelations-john-taylor (Notice which is missing)


Basic Jist of the Show

“We would have to say, as two apostles who have covered the world and know the history of the Church and know the integrity of the First Presidency and the Quorum of the Twelve from the beginning, there has been no attempt on the part of the Church leaders to try to hide anything from anybody.” – Elder M Russell Ballard in attendance w/ Elder Oaks – https://www.youtube.com/watch?v=Uj2VWhuW50w

In the 1911 trial of John W Taylor (https://mormondiscussionpodcast.org/wp-content/uploads/sites/2/2020/09/John-W.-Taylor-Trial.pdf), there is a lengthy discussion over multiple days involving the 1886 unpublished revelation. Where these 5 men among the rest of the Q12 are deeply analyzing the 1886 revelation as well as discussing the whereabouts of the copies and original of this revelation. Here are the pertinent parts of the discussion

A. W. Ivins: *Do you know how extensively this revelation has been circulated in times past and has guided people in their actions in this regard?*J. W. Taylor: Brother Joseph Robinson came to me and asked for a copy of it upon the suggestion of Brother Cowley and he got it from Brother Badger. Brother Joseph F. Smith Jr., also got a copy***, but I don’t know how many have got copies from these.***

J. F. Smith Jr (Joseph Fielding Smith).: It is true I obtained a copy of this revelation from Brother Rodney Badger. He let me take the original and I made a copy and filed it in the Historian’s Office, this was but a short time ago

The Church between 1886 and 1933 was dealing extensively with the Wooley’s and other Fundamentalists groups and leaders who constantly used the 1886 revelation as the basis for their authorization in continuing polygamy. When you understand the history it becomes clear that the Church absolutely authorized others to continue the principle at their own risk but under the direction of the LDS Church and now they were dealing with the monster they had created as they changed their mind on polygamy half way through. So on June 17 1933 the Church released the following First Presidency Statement which is a flat out lie and coverup.

And once again we have Joseph Fielding Smith (a future Church President) as the man who stored away a document that ended up being withheld from the public, and four other men who lied with him including 3 other Church Presidents.