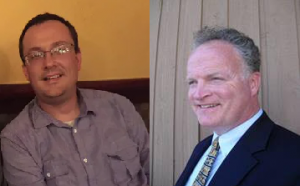 Bill Reel (left) and Radio Free Mormon (Right) have been deconstructing and discussing Mormonism for years.  They are trusted voices for getting at the heart of the matter within historical and doctrinal issues that others find so messy and troubling.  Both have led popular podcasts and both have contributed in serious ways to the conversations happening in Mormonism.

Both have been featured Speakers at Sunstone Conference as well as other speaking engagements across the country.

16 thoughts on “About the Hosts”