Mormonism LIVE: 084: Did God Have Sex With Mary? 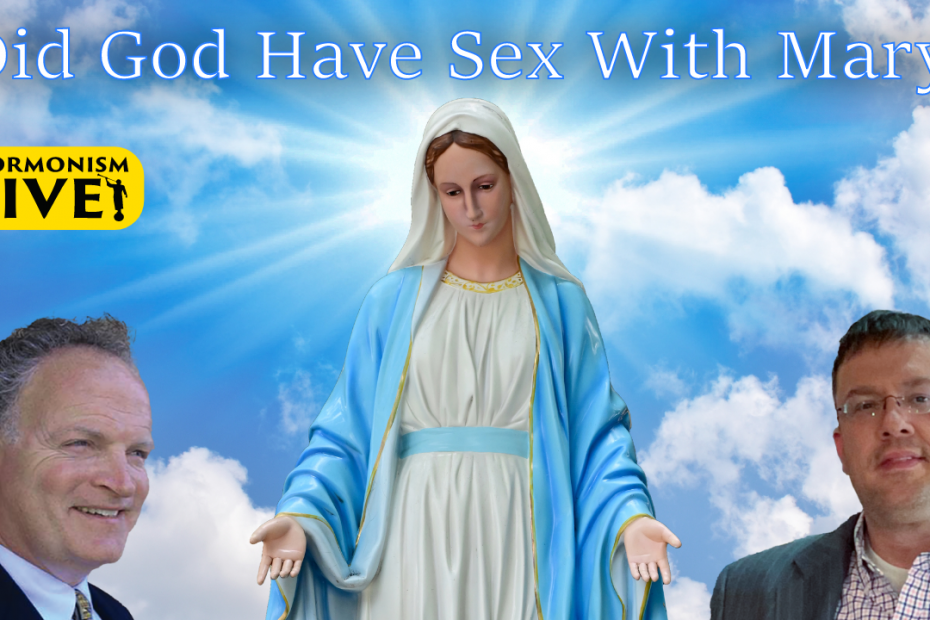 When RFM and Bill Reel joined Mormonism, they heard rumors that Early LDS Leaders had taught that Mary was impregnated by Heavenly Father via a sexual act. But the Church and its apologists insisted that such idea was a misconstrued out of context assumption and with a sleight of hand the problem was gone…. Or is it. Tonight on Mormonism LIVE, RFM and Bill Reel take a long hard look at where this idea comes from within the history and see if baby Jesus was in fact the illegitimate child of our heavenly father.

(This is a BYU Library Digital Collections page)

My next sermon will be….

NOTE: Orson Pratt was opposed to BY on the Adam-God Theory; i.e., that it was Adam who came and had sex with Mary; but Orson Pratt was totally on board with the idea that Elohim did the exact same thing!

BUT THEN BRIGHAM YOUNG ECHOES THE IDEA

Brigham Young AUGUST 19, 1866 “The man Joseph, the husband of Mary, did not, that we know of, have more than one wife, but Mary the wife of Joseph had another husband.” [Journal of Discourses, vol. 11:268]

Bill: Orson Pratt and Brigham Young Agree…. Huh –  It is not just a single quote “hidden in an obscure paragraph of one talk”.

His message delivered, Gabriel departed, leaving the chosen Virgin of Nazareth to ponder over her wondrous experience. Mary’s promised Son was to be “The Only Begotten” of the Father in the flesh; so it had been both positively and abundantly predicted. True, the event was unprecedented; true also it has never been paralleled; but that the virgin birth would be unique was as truly essential to the fulfillment of prophecy as that it should occur at all. That Child to be born of Mary was begotten of Elohim, the Eternal Father, not in violation of natural law but in accordance with a higher manifestation thereof; and, the offspring from that association of supreme sanctity, celestial Sireship, and pure though mortal maternity, was of right to be called the “Son of the Highest.” In His nature would be combined the powers of Godhood with the capacity and possibilities of mortality; and this through the ordinary operation of the fundamental law of heredity, declared of God, demonstrated by science, and admitted by philosophy, that living beings shall propagate—after their kind. The Child Jesus was to inherit the physical, mental, and spiritual traits, tendencies, and powers that characterized His parents—one immortal and glorified—God, the other human—woman.

Melvin J. Ballard (Mormon apostle): “as to whether or not his was a virgin birth, a birth wherein divine power interceded. … And if God the Eternal Father is not the real Father of Jesus Christ, then are we in confusion; then is he not in reality the Son of God. But we declare that he is the Only Begotten of the Father in the flesh. … No man or woman can live in mortality and survive the presence of the Highest except by the sustaining power of the Holy Ghost. So it came upon her to prepare her for admittance into the divine presence, and the power of the Highest, who is the Father, was present, and overshadowed her, and the holy Child that was born of her was called the Son of God. Men who deny this, or who think that it degrades our Father, have no true conception of the sacredness of the most marvelous power with which God has endowed mortal men–the power of creation. Even though that power may be abused and may become a mere harp of pleasure to the wicked, nevertheless it is the most sacred and holy and divine function with which God has endowed man. Made holy, it is retained by the Father of us all, and in his exercise of that great and marvelous creative power and function, he did not debase himself, degrade himself, nor debauch his daughter. Thus Christ became the literal Son of a divine Father, and no one else was worthy to be his father.” [Deseret News, 23 Dec 1923; Sermons and Missionary Services of Melvin J. Ballard, 166-167.]

CHAPTER 2 THE SON OF GOD THE ONLY BEGOTTEN SON THE FIRSTBORN.

NOTE: This ties in later with the FAIR response which relies first on the passage of scripture that JSF challenges and refutes!

Mr. Kelley signed his answer as follows: “I do not know. Wm. H. Kelley.”

Just think of this for a moment. Here is a man professing to be the chief of the special witnesses for Christ, declaring that he does not know whether Jesus is the Son of God the Father or the Son of the Holy Ghost. And the Savior declared it so plainly that he was the Son of the Father, his Only Begotten, and was so acknowledged by the Father throughout the scriptures. “And this is life eternal, that they might know thee the only true God, and Jesus Christ, whom thou hast sent.”

SON OF GOD: (p. 670) God the Father is a perfected, glorified, holy Man, an immortal Personage. And Christ was born into the world as the literal Son of this Holy Being; he was born in the same personal, real, and literal sense that any mortal son is born to a mortal father. There is nothing figurative about his paternity; he was begotten, conceived and born in the normal and natural course of events, for he is the Son of God, and that designation means what it says.

Virgin Birth. SEE ANNUNCIATION, BIRTH, CHRIST, IMMACULATE CONCEPTION THEORY, MARY. Our Lord is the only mortal person ever born to a virgin, because he is the only person who ever had an immortal Father. Mary, his mother, “was carried away in the Spirit” (1 Ne. 11:13-21), was “overshadowed” by the Holy Ghost, and the conception which took place “by the power of the Holy Ghost” resulted in the bringing forth of the literal and personal Son of God the Father. (Alma 7: 10; 2 Ne. 17: 14; Isa. 7:14; Matt. 1:18-25; Luke 1:26-38.) Christ is not the Son of the Holy Ghost, but of the Father. (Doctrines of Salvation, vol. I, pp. 18-20.) Modernistic teachings denying the virgin birth are utterly and completely apostate and false.

NOTE: This innovation allows for Mary to still be a “virgin” so long as we define a virgin who has never had sex with a man; but apparently Mary could have physical sex with an immortal being and still be considered a “virgin.”

Eldred G Smith : “If our Father in heaven is an exalted being-I just want to knock one little principle that is taught around the world that I cannot believe-then he has the capacity and the ability of accomplishing and doing anything that any mortal can do. I cannot believe this doctrine that is taught universally of an immaculate conception of Christ, that Christ was born from an immaculate conception. There is no such thing possible. Jesus Christ was the literal Son of God the Father by his spirit body and also by his physical body. The difference between Christ and us is that he had the same Father for his spirit body that he had for his physical body. But He had a mortal mother on earth. The scriptures say that she was overshadowed by the Holy Ghost. (See Luke 1:35.) Of course there had to be some means of making this possible while she was still in mortality. Further details are not necessary, but Christ himself declared all his life that he was the Son of God, and he meant it” (Eldred G. Smith (Patriarch to the Church), March 10, 1964, BYU Speeches of the Year, 1964, p.8).

“He is the Son of God, literally, actually, as men are the sons of mortal parents..” (What the Mormons Think of Christ, a pamphlet published by the LDS Church, p. 27) 1982

Bill:  https://mormonismlive.org/wp-content/uploads/2022/07/Mormon-Leaders-claim-God-impregnated-Mary-by-sex.pdf
Wait a minute…. Brigham Young taught it, Orson Pratt Agreed, The early brethren taught it including Heber C Kimball and Melvin J Ballard.  It has been taught over and over by Joseph Fielding Smith, Bruce R McConkie, Ezra Taft Benson.  It was spoken of as a way to know LDS Mormonism was true and the Reorganites weren’t. It was taught in Jesus the Christ, part of the “approved missionary library” and is spoken of in the Encyclopedia of Mormonism which while not official ?  Huh…  So It is not just a single quote “hidden in an obscure paragraph of one talk”.   PLAY NEIL ANDERSON QUOTE

We are very much concerned that some of our teachers seem to be obsessed of the idea of teaching doctrine that cannot be substantiated and making comments beyond what the Lord has actually said.

You asked about the birth of the Savior. Never have I talked about sexual intercourse between Deity and the mother of the Savior. If teachers were wise in speaking of this matter about which the Lord has said but very little, they would rest their discussion on this subject with merely the words which are recorded on this subject in Luke 1:34-35:

Then said Mary unto the angel, How shall this be, seeing I know not a man? And the angel answered and said unto her, The Holy Ghost shall come upon thee, and the power of the Highest shall overshadow thee: therefore also that holy thing which shall be born of thee shall be called the Son of God.

“Remember that the being who was brought about by [Mary’s] conception was a divine personage. We need not question His method to accomplish His purposes. Perhaps we would do well to remember the words of Isaiah 55:8-9:

Let the Lord rest His case with this declaration and wait until He sees fit to tell us more.” (The Teachings of Harold B. Lee, ed. Clyde J. Williams 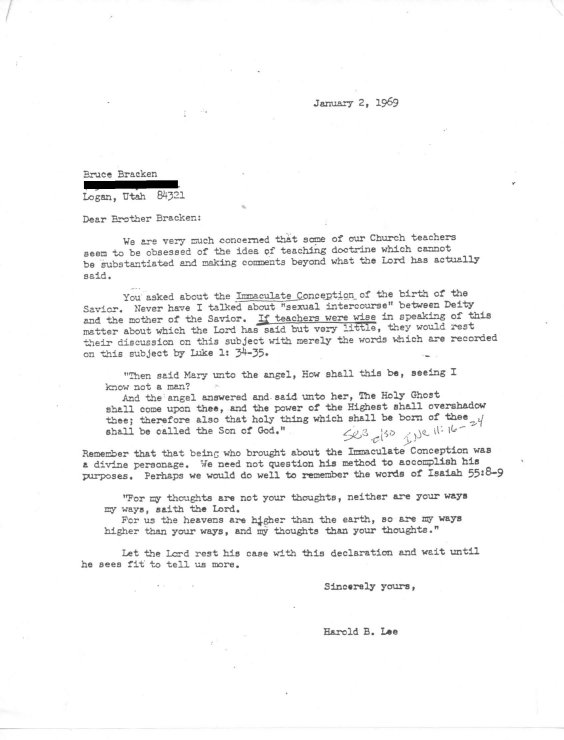