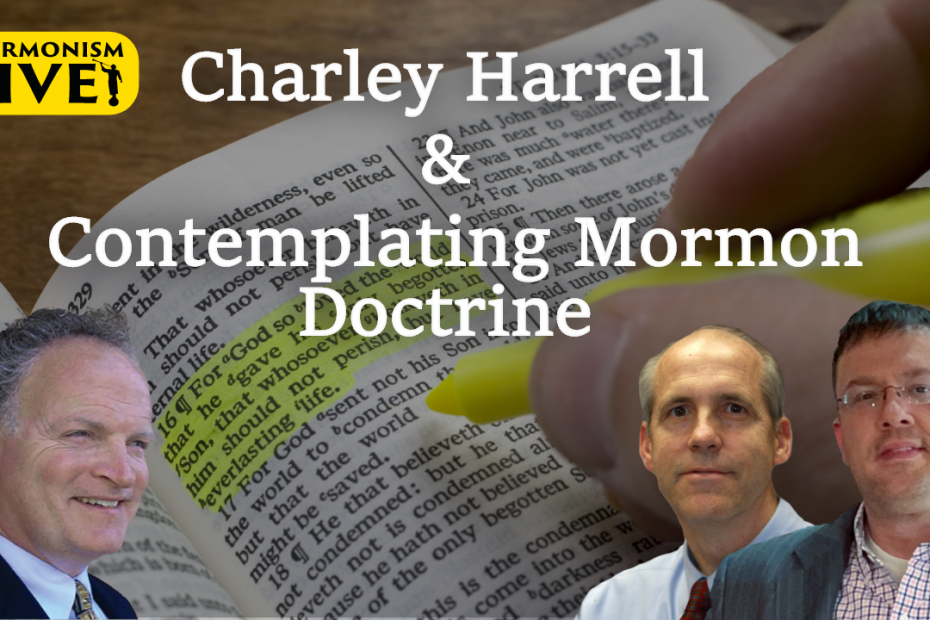 We sit down with Former BYU Professor, and author of the book “This Is My Doctrine: The Development of Mormon Theology”, Charley Harrell to dive into several important assumptions Mormonism and its leaders and members impose in order to cleanly define doctrine. But do these really hold up? Can the word Doctrine as used within the LDS Church be defined in such a way that any imposed definition can be dependable?

A.) What is Church doctrine?

“a belief or set of beliefs held and taught by a Church, political party, or other group. ‘the doctrine of predestination’”

We should share briefly that LDS leaders have attempted to define doctrine in ways that expose that the word is fluid and simply doesn’t hold up to scrutiny or critical thinking.

What does this definition say about doctrines that were widely taught in prior times and no longer taught today?

Plural Marriage (MY EXPERIENCE IN HIGH PRIEST GROUP ABOUT DOCTRINE)

Reason for the priesthood ban

Does the fact that it has to be taught by everyone in the 1st presidency and Q12 impose an unreasonably high bar?

WASN’T THERE AT TIME NOT TOO LONG AGO WHEN DOCTRINE WAS ESTABLISHED FIRST BY WHETHER THE PROPHET SAID IT; THEN BY WHETHER IT WAS A FIRST PRESIDENCY STATEMENT; THEN (NOW) BY WHETHER ALL FIFTEEN AGREE? IT SEEMS THAT THE DISTINCTION BETWEEN THE FIRST PRESIDENCY AND QUORUM OF TWELVE HAVE ALL BUT DISAPPEARED AT LEAST WHEN IT COMES TO ESTABLISHING DOCTRINE

QUESTION: WHEN IS A PROPHET ACTING AS SUCH IF NOT WHEN HE IS ADDRESSING THE CHURCH IN HIS ROLE AS PROPHET?  IT SHOULD REALLY BE VERY SIMPLE; NOT A GET OUT OF JAIL FREE CARD EVERY TIME A PROPHET SPEAKS AS A PROPHET AND GETS IT WRONG.

The Church makes several claims about Mormon doctrines that together can be said to constitute the doctrine of LDS doctrine. But are these claims really warranted by empirical evidence?

B.) Claims vs Realities

Reality: Doctrine doesn’t just jump out of the scriptures, it has to be interpreted by the reader. LDS doctrine, therefore, doesn’t actually “reside” in the scriptures, but in the Church’s interpretation of the scriptures. Further, since scripture is not univocal, one must pick and choose which passages to use. So in reality Mormon doctrine derives from a biased selection of scriptural fragments, often taken out of context, that are cobbled together to construct a doctrinal view.

Russell M. Nelson – TIME STAMP 13:47 to 14:58  – “Sometimes we as leaders of the Church are criticized for holding firm to the laws of God, defending the Savior’s doctrine, and resisting the social pressures of our day. But our commission as ordained apostles is “to go into all the world to preach [His] gospel unto every creature.”8 That means we are commanded to teach truth. In doing so, sometimes we are accused of being uncaring as we teach the Father’s requirements for exaltation in the celestial kingdom. But wouldn’t it be far more uncaring for us not to tell the truth—not to teach what God has revealed? It is precisely because we do care deeply about all of God’s children that we proclaim His truth. We may not always tell people what they want to hear. Prophets are rarely popular. But we will always teach the truth!”

Reality: Many doctrines have been shown to be in error, especially when disproven by science (age of the earth, of man, etc.) and therefore changed or even discarded.

Reality: There are many examples where prophets claimed to be speaking under the power of the HG, and yet their teachings were later rejected.  (There are also many examples where members knew those doctrines were true through spiritual means and such has since been disavowed) Furthermore, what we deem to be spiritual promptings are suspect and inconsistent.

Reality: The doctrinal teachings of scripture are not consistent. Some passages speak of God as a spirit, others refer to him as having a body of flesh and bones. So to speak of any scriptural doctrine as though scripture is univocal is unsustainable. Example: Christ preaching to spirits in prison.

a.) “Those who observe us say that we are moving into the mainstream of religion. We are not changing. The world’s perception of us is changing. We teach the same doctrine. We have the same organization.” – Gordon B. Hinckley

Reality: Many doctrines have changed over time. In fact, as shown in my book, there isn’t a single major doctrine of the Church that hasn’t changed with time, especially if we go back to biblical times.

Note: The fact that the Church defines Doctrine as eternal, unchanging truth makes one wonder if the Church has any doctrines at all, since virtually all of its doctrines have undergone change. Perhaps the Church should either use a different term or redefine what doctrine means.

Reality: There is no preordained path along which doctrine unfolds to a fullness of truth. Instead there were unforeseen twists and turns, zigs and zags, which could have led to radically different outcomes. It is only the particular random forces at play that caused each doctrine to turn out like it has so far.

Reality: The kinds of things that are being “restored” are all minor and pertain to procedural and organizational issues. There is little, if any, further light and knowledge on doctrinal matters.

In fact, on doctrinal matters, there has actually been a roll back, so that we know less now then we did before.

Notice that these are all doctrines that history, science and cultural pressures have caused the church to rethink. More and more, the answer to questions for which we used to have answers for is, “We don’t know” or “we don’t teach that.”

Reality: These claims don’t warrant the level of certainty that leaders often place on them and which lead members to blindly accept them without investigation. It isn’t that the Church makes so many claims about doctrine that is disturbing, but the certainty they place in these claims.

C.) Conclusion: The doctrine of LDS doctrine is a set of highly questionable truth claims that renders all other doctrines suspect.