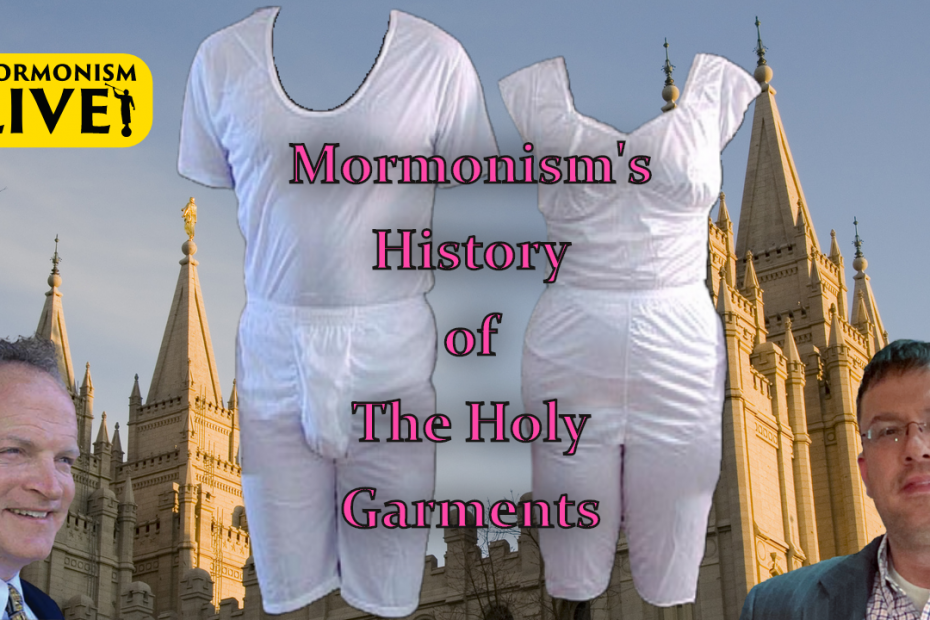 Bill & RFM take a look at Mormonism’s Holy Garments. We look at the history, doctrine, and disavowed theories and spiritual speculation around them. Are they a magical spiritual protection? Were they allowed to have their design changed? Must they be worn all day every day? What super secret sacred details will Bill and RFM uncover?

A.) How Garments came to be

B.) They can not be altered and yet were altered

1.) Lets show a couple of these and move on quickly

D.) Instruction around wearing them and how that has changed

1.) They are to be worn day and night

a.) Carlos Asay “The Temple Garment” “Night and Day”

b.) Russel M Nelson “Prepare for the Blessings of the Temple”  ““Church members who have been clothed with the garment in the temple have made a covenant to wear it throughout their lives. This has been interpreted to mean that it is worn as underclothing both day and night. … The promise of protection and blessings is conditioned upon worthiness and faithfulness in keeping the covenant. “The fundamental principle ought to be to wear the garment and not to find occasions to remove it. Thus, members should not remove either all or part of the garment to work in the yard or to lounge around the home in swimwear or immodest clothing. Nor should they remove it to participate in recreational activities that can reasonably be done with the garment worn properly beneath regular clothing. When the garment must be removed, such as for swimming, it should be restored as soon as possible.

d.) The letter Bill had to read to every person receiving & Renewing a temple recommend

2.) Increasing complaints seemed to have once again led to changes

3.) The wording is now more ambiguous

a.)  Today the Temple interview has been changed to  (Question 13: Do you keep the covenants that you made in the temple, including wearing the temple garment as instructed in the endowment? (Read the “Wearing the Temple Garment” statement, included below, to each member.)

b.) statement read today “Wearing the Temple Garment The temple garment is a reminder of covenants made in the temple and, when worn properly throughout life, will serve as a protection against temptation and evil. The garment should be worn beneath the outer clothing. It should not be removed for activities that can reasonably be done while wearing the garment, and it should not be modified to accommodate different styles of clothing. Endowed members should seek the guidance of the Holy Spirit to answer personal questions about wearing the garment. It is a sacred privilege to wear the garment and doing so is an outward expression of an inner commitment to follow the Savior Jesus Christ.”

4.) Jana Riess – “The removal of “night and day as instructed in the endowment” from the temple recommend interview resolves a weird problem that was present for years: The endowment ceremony itself didn’t explicitly have people covenant to wear the garment “night and day.” The “night and day” language was added to the TRI process in 1976; 20 years later, the phrase “in accordance with the covenant you made in the temple” was inserted as well. So for at least four decades, round-the-clock garment use has been the expectation as specified in church curriculum as well as in a separate set of guidelines that local leaders were instructed to read to members to explain what it meant in practice to wear the garment “throughout your life.””

E.) How they went from magical to not magical

F.) Quickly explain how they went from don’t show them or talk about them to the Church putting out videos showing them and talking about them

G.) Five Facts about Garments you may not have known

1 thought on “Mormonism LIVE: 079: Mormonism’s History of The Holy Garments”