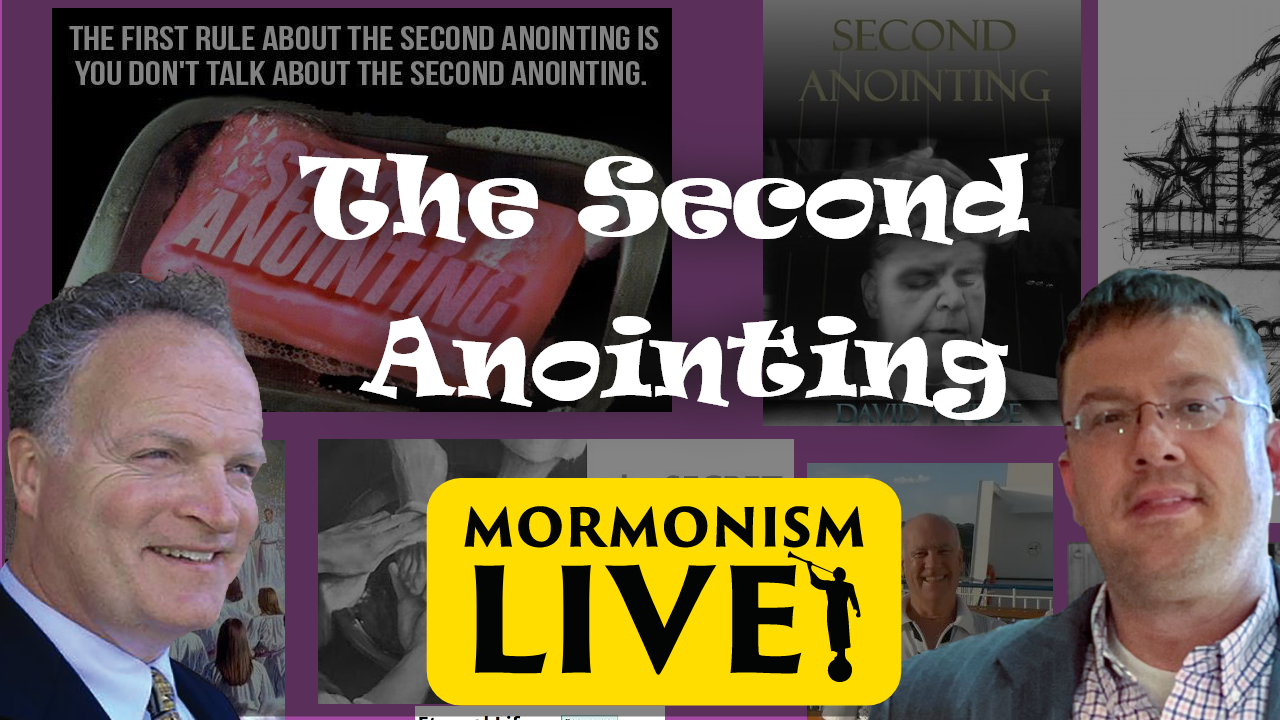 In Mormonism the very elite of membership including Stake Presidents, Mission Presidents, along with Seventies and the top 15 along with all their wives receive a secret ritual that confers to them that their “Calling and Election” has been made sure. What is this ritual? What do we know about it? How has the church framed it in their theology? and why do only a select few receive it? This and more on this week’s episode.

https://www.churchofjesuschrist.org/study/manual/doctrines-of-the-gospel/chapter-19?lang=eng Do not attempt in any way to discuss or answer questions about the second anointing.

Notice these supporting statements in the manual https://www.churchofjesuschrist.org/study/manual/doctrines-of-the-gospel-student-manual/19-eternal-life?lang=eng&para=p34#p34
“Ordinances instituted in the heavens before the foundation of the world, in the priesthood, for the salvation of men, are not to be altered or changed. All must be saved on the same principles.

“All men who become heirs of God and joint heirs with Jesus Christ will have to receive the fulness of the ordinances of his kingdom; and those who will not receive all the ordinances will come short of the fullness of that glory, if they do not lose the whole” (Smith, Teachings, 308–9).

“The elect of God comprise a very select group, an inner circle of faithful members of The Church of Jesus Christ of Latter-day Saints. They are the portion of church members who are striving with all their hearts to keep the fulness of the gospel law in this life so that they can become inheritors of the fulness of gospel rewards in the life to come” (McConkie, Mormon Doctrine, 217).

“There are many who are called to serve in the kingdom of God. … The Lord has never promised to those who are unfaithful, who have received the call and appointment but have not endured, that they shall receive the blessing. While there are many who seemingly feel this to be the case, only those who serve and are faithful shall be chosen. The reason why so many fall away is explained to be, ‘because their hearts are set so much upon the things of this world, and aspire to the honors of men.’” (Joseph Fielding Smith, Church History and Modern Revelation, 2:177–78).   (Shame for those who don’t receive it and pride and feeling special for those who do.)

That Mary was Jesus wife in early LDS Theology

a.) Journal of Heber C. Kimball, “Book 91”, CHO; April 1, 1844; Typed w/o sic. Apriel the first day 1844 I Heber C Kimball received the washing of my feet, and was annointed by my wife Vilate fore my burial. that is my feet head Stomach. Even as Mary did Jesus, that She mite have a claim on him in the Reserrection in the City of Nauvoo [next page] In 1845 I received the washing of my feet by [left black in the original; Heber C. Kimball’s handwriting stops here and Vilate Kimball’s begins:] I Vilate Kimball do hereby certify that on the first day of April 1844 I attended to washing and anointing the head Stomach and feet of my dear companion Heber C Kimball, that I may have claim upon him in the morning of the first resurrection. /s/ Vilate Kimball

b.) 9. Mary Ellen A. Kimball Journal, Church Archives; February 18, 1857; W/O sic. [Heber C. Kimball] came to our room [and] said he did not feel well. spoke of an ordinance which he had previously taught and said that only one of his wives had attended to it. he then spoke of our Savior and his wives but more particularly of Mary [and her] faithfulness to her Lord Said Mary felt to say that she intended to devote her time to him for he had told her that his time was short and he must soon leave them Now she says I design to attend to his words and teaching Let Martha and the rest say what they would. The Savior then told Martha to let Mary alone for she had chosen the better part which should never be taken from her Now said He follow me and you shall see my father This she did even to the tomb and was the first to see him resurrected from the grave. 10. Samuel Hollister Rogers Journal; BYU Special Collections, Mss/1134/V.II/p.78  22 September 1879 Monday 22 September 1879 the evening of the fifty second Anniversary of the Angel delivering of the Plates of the Book of Mormon to Joseph Smith the Prophet of the Lord, I dedicated the house and room also blest the Oil after which my Ruth Anointed my feet and wiped them with the hair of her head, then kissed them after the pattern as written in the Testament of the Lord Jesus Christ.

The 144,000 in Revelation are those who receive the second anointing

a.)  History of the Church, Vol. 6:196; 4 February 1844; Discourse by Joseph Smith. This is not in Teachings of the Prophet Joseph Smith. Sunday, 4.—I attended prayer-meeting with the quorum [of the Holy Order] in the assembly room, and made some remarks respecting the hundred and forty four thousand mentioned by John the Revelator, showing that the selection of persons to form that number had already commenced. [This Joseph could confidently say inasmuch as over 20 brethren had just received their second anointings.]  Journal of Wilford Woodruff; 4 February 1844. I met with the quorum in the evening Br / & Sister Lott was present we had a good / time in prayer Br Joseph gave us good instrution in meekness & humility the revelator / John remarks was quoted to in the evening / concerning the 144000 of the tribes of Israel / Cornelius P Lott & wife received their 2d Anointing / & Sealing.

b.) Teachings of the Prophet Joseph Smith, p. 366; 2 May 1844. Also H.C. 6:363-67. Discourse by Joseph Smith. I am going on in my progress for eternal life. It is not only necessary that you should be baptized for your dead, but you will have to go through all the ordinances for them, the same as you have gone through to save yourselves.  There will be 144,000 saviors on Mount Zion, and with them an innumerable host that no man can number. Oh! I beseech you to go forward, go forward and make your calling and election sure.

“One of Ballard’s primary directives was that no one share that they received the Second Anointing. He said uninitiated members shouldn’t even know the ordinance exists. “If anyone asks, deny any knowledge whatsoever,” – Hans Mattson relaying what he was told by M Russel Ballard

Tom Phillips on being given similar instruction

“In April 2002 Elder Harold G. Hillam of the First Quorum of Seventy, as President of the Europe West Area, called me into his office. He said he was extending to me and my wife (she was not present), on behalf of President Hinckley, an invitation to receive a ‘special blessing’ in the Preston England Temple. He asked whether I had heard of the ‘second endowment’ to which I replied no. I later told him that I had heard of it, but was so stunned by his invitation my mind went blank regarding the matter. He told me very few people receive this blessing and it must be kept secret. He said if the general membership knew about it there would be problems. More would want to receive the ordinance than the apostles have time to accommodate and members would wonder why ‘so and so’ had received it but they had not. I must not even tell my children. He said I should just tell them that their mother and I were going away for the day or weekend… I did not like lying to my family and friends as to our whereabouts that weekend. I did not feel comfortable as it was dishonest but I was instructed not to disclose what was happening. To tell people you will be at the temple on a Sunday, when supposedly all temples are closed, would raise further questions. I therefore told my children we were going to the temple for the weekend and would be attending a special meeting with Elder Ballard and the Area President on Sunday. This was not too unusual for my children to accept as I regularly attended Area Presidency meetings and had been assisting these same brethren the day before at a training session for stake presidents. Also, it was as truthful as I considered I could be while still keeping the second anointing secret… While walking in the temple grounds in the early evening we unexpectedly met a member of our ward who had attended a family wedding that day. She asked us what we were doing at the temple on a Saturday evening. I quickly mentioned something about Area Presidency meetings (she knew of my calling at the time, that I worked closely with the Area Presidency) and changed the subject. Again, I did not feel comfortable ‘lying for the Lord’.”

Elder Ballard claiming the Church has never hid anything

“We would have to say, as two Apostles who have covered the world and know the history of the Church and know the integrity of the First Presidency and the Quorum of the Twelve from the beginning, there has been no attempt on the part of the Church leaders to try to hide anything from anybody.” – Elder M Russell Ballard